Athena on boat: Travel/Fashion Photography—This was a rare opportunity to say the least. It was at the end of an island-hopping tour when this young lady agreed to an impromptu photo shoot on the way back to the main island. Athena was lying alone on a bench closer to the water so I went over and told her that I had a question for her. I told her that I was a professional photographer from Hawaii and asked if she’d like to take some photos on the boat on the way back. I was very pleasantly surprised when she responded very enthusiastically to my offer.

The first thing I did was ask the Captain for permission to photograph Athena on his boat. No problem. I then went about trying to find something to use as a reflector. We came up with a small piece of aluminum foil, but it proved to be pretty useless. I had spoken to a guy named Jason throughout the day. Jason was a photo buff as well so I asked him to help out with the shoot. He happily agreed. We started with some shots on the back of the boat but the sun was still a bit high in the sky and our little reflector wasn’t do much to help—although it did bounce some light in a few of the shots. The main culprit on the back of the boat was the limited space and the wind. Athena’s hair was blowing uncontrollably. We did get a few usable shots though. 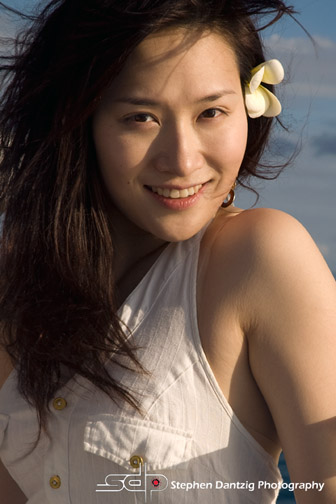 The light was still a bit harsh for my taste here and small aluminum foil was not helping much. The light–and the images–improved as we kept shooting and moved to the bow of the ship. 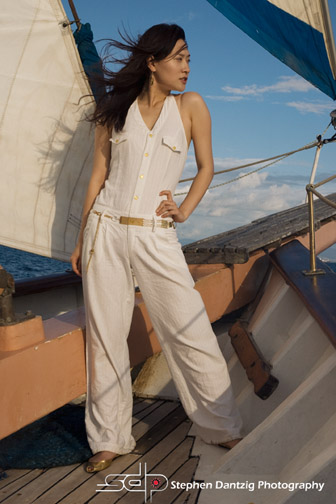 We moved to the bow of the ship and it was a different story. The light, while still tough on Athena’s eyes, was becoming much more flattering. We also had more room to work with, so we went to work with Jason relaying my instructions to her. 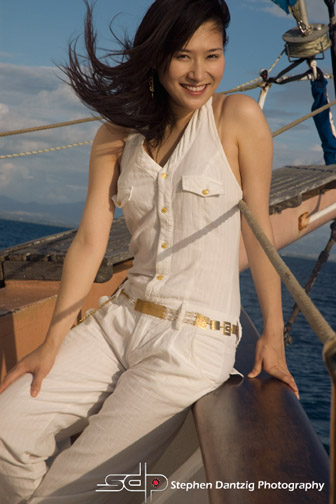 Athena was a great sport. She had never modeled before and took the helm with a bunch of friendly strangers watching—and did a super job. We had to use the “close your eyes until I count to two then open” trick because the sun was still quite bright. I would shoot as many frames as I could in a couple of seconds and then have her rest. I normally bring strobes with me for location shoots, but obviously did not have them. The freedom to shoot without waiting for the strobes to recycle helped (I now use a strong power inverter, so my strobes recycle in seconds). I also did not have my trusty light meter with me, so I (gasp) relied on the camera’s meter on Program mode! This worked because the sun was behind me and was illuminating the entire scene—including Athena—evenly. 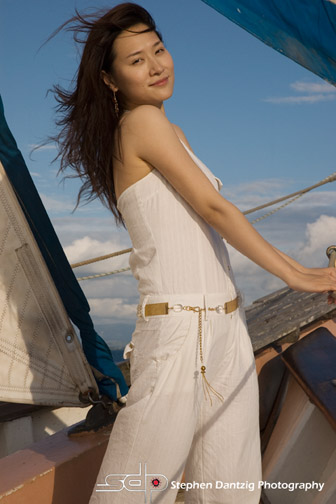 Yes, the horizon is very tilted in this and other images in this series. You either tilt the horizon dramatically as in these images…or you DON’T! A slight off-kilter horizon is a mistake and LOOKS like it.

I realized later that I was in “my zone” while photographing Athena. I was completely unaware of anyone else on the boat (except for Jason) or even my surroundings to a degree. I was, thankfully, aware enough to recognize that I had to find an anchor point to lean against or I’d be joining the MahiMahi in the ocean! It was interesting in hindsight to recognize how totally absorbed I am during a shoot.

We scrolled though the images downstairs in the dining area. Again, like my strobes, I obviously did not have my model releases with me, but I made sure to at least ask her if it was OK for me to use the photos for my websites and books/magazines, etc. She said yes (so here they are!) (I have only used the images for editorial purposes, so “technically” I don’t need a signed release, but the images could and never have been used for “commercial” or advertising use. Those uses would require a signed release: a verbal “OK” would NOT be sufficient). It was hard to see with the small display screen on my camera, but the shots looked good and Athena seemed very happy with her first experience modeling. It was tough editing the images down to the few you see here and I emailed her the edits, but never heard from her. I don’t know if she ever pursued her “new” career or not, but it was a really fun way to end a great day in Fiji! Camera: Nikon D70. Exposures f9-f10, 1/400th-1/640th of a second, ISO 200.